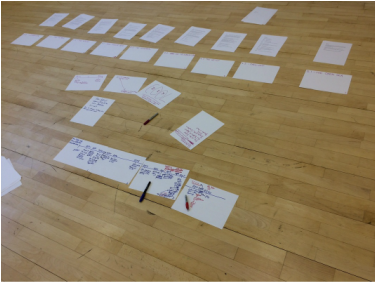 Something Else - R+D process

Monday -  Kate and Eve worked on the world and backstory of Something Else. We found that the characters had been politicised by events we all recognise: 9/11 and its aftermath, the Iraq War, the financial crash, the student protests of 2010. In order to bring us to the lawless, chaotic world of East Anglia in 2020, a few phenomena are heightened to a point of crisis:
​
1. Catastrophic flooding of low-lying land in the UK.
2. A force of secret police who have the power to disappear people, without inquiry.
3. The appearance of Something Else - an organisation that will deliver your messages without surveillance from commercial or governmental powers.

Having started as a whimsical art/activism project, 3 has recently become essential to the lives of ordinary citizens due to the presence of 1 and 2. And that's where we find ourselves at the start of the piece. We also talked about the group's retro-cool self-image, their idealism, A Field in England, and the underestimated power of the DIY. Just because its a home-made bomb, that doesn't mean it won't explode. 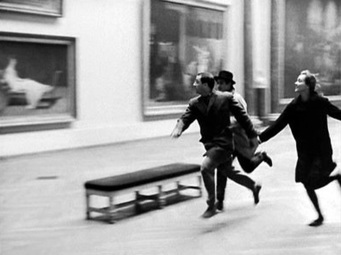 Tuesday - Today we introduced the cast to the world of Something Else. We imagined what it would be like to rehearse in a world where theatre was an illegal activity, where every step of your day was monitored, and in a world where we were members of a superhero collective.
Agatha, Flora and Gyuri were then thrown in the deep end of devising the first scene; a representation of every keystroke of the protagonist's day, the moment she decides to join the underground group.
The rhythms of the text and action are so filmic, its super-exciting to try them out in the 3D, live-action space of our irregular-shaped rehearsal room at Ovalhouse.

Wednesday -Today we created the flooded fenlands using black bin-liners. We recorded the voice of Jonas, Nila's worldly-wise guide to Something Else. We went to a rave in a Cathedral courtyard and followed a mission into its gloomy interior.
Bang in the middle of the play we found some questions: Why is an organisation with such simple principles under such strain? And how does this strain show up the cracks in its members' personal relationships?

How do their utopian dreams turn to dystopian reality?
​
And how do you gut a swan onstage? 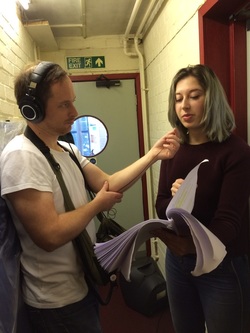 Thursday - The time had come to find out more about our protagonist, both the past she is running from and what might lie ahead. We told our own stories  as well as listening to hers, until everything started to sound like an old-wives tale (including the telephone call to Argos about some mysterious disappearing filing cabinets.) Eve re-joined the team today and major decisions were made about the text and what we will show next week; it seems  that Something Else is the prequel to an as-yet-unmade blockbuster trilogy about a superhero Fen-woman who combats climate change and interrogates our darkest secrets.
We made all the recordings for the show today alongside some rolled-up carpets in the cupboard next to our rehearsal room, including a cameo v/o from the playwright herself (<- proof). 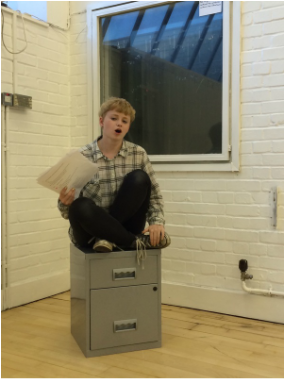 Friday - We discovered that we had in fact been working with a tabby cat, a labrador and a black panther all week, in the guise of humans! There were also several new arrivals to the rehearsal room: our wonderful Creative Producer (Ania), 2 silver filing cabinets (Rattle and Thunk), and a new performance draft of the script. Our afternoon was jam-packed with incorporating these elements into the work we had already done, and hearing Matthias' sound effects in situ.
This week has been full of surprises, and also a huge deepening of our understanding of what this piece is; the world of Something Else might look alien, with the rawness and strangeness of its materials and the heightened stakes of survival. But it emerges from a semi-apocalyptic sense of where the UK is heading right now, led there in insidious inches, slowly and surely. The internal contradictions of the characters are also recognisable; their capacity for warmth and friendship, and constant movement between poles of anger and cold rationalism. This swinging pendulum feels a familiar motion in our efforts to understand the society we find ourselves living in today.
It's been like diving off the side of the Something Else ship, and bringing our findings to the surface. We can't wait to hear what audiences make of them next week!
Powered by